President of Shoalhaven Dressage Club, Alycia Targa, not only took on the challenge of organizing her first Club Championships this year, she also took the opportunity to ride (and win) her first Grand Prix test. Alycia was not without competition as local vet Gill Rickard, riding the beautiful Spanish Stallion Grandioso in his first Grand Prix test, was only 0.15% behind. Pamela Bice on the elegant Rosthwaite Tinkerbell had a personal best score to stay within a few percentage points of the bigger horses, coming in third.

However it was Alycia and Jane Bruce’s 2016 middle tour NSW horse of the year, CP Dresden, who won the Big Tour Championship, scoring an amazing 70.263% in the Intermediate 11. Alycia was extremely pleased with ‘Mr Des’ whose piaffe work has improved dramatically in the past few weeks and is showing huge talent for such a young horse. 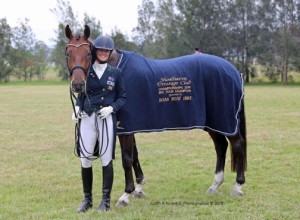 Generous sponsorship from many local businesses meant that there were rugs for the champions of each level as well as pony and junior championship rugs.

“Many thanks to the committee, all the helpers and sponsors who made the SDC Championships a terrific day. Smoothly run. Even controlled the weather. We had a great day.”