On the Saturday prior to our February competition, as the rain came pelting down, some of us were concerned that our competition would have to be cancelled. However the rain proved to be a blessing, softening up the grounds so the horses could enjoy the softer going, and the competition went ahead under clear sunny skies.

Our first competition for 2016 saw some wonderful tests ridden. High score of the day went to Sandra Steward and Waverley Freya with 73.889% in the unofficial 2.1. 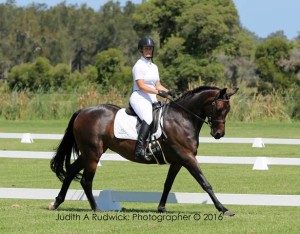 Sandra was closely followed by Angus Fripp riding Maxine Fripp’s lovely mareTW Francheska with 71.111% and Kirra Alder on Mystere Mi with 70.556%, it was certainly a very competitive class.

Other noteworthy performances were achieved by Madeleine Phillips on Swanreach Gold Charm achieving 71.579% for a win in the Junior Prep A and 67.632% to win the Junior Prep B. Jenifer Symes showed the elegant Bellissimo King Hit in the Open Prep A to win with 71.316%, Jen continued her good form to also win the Prep B.

Thanks to the committee for organising such a well run competition. Our next comp is on Sunday the 24th of April and entries are now open on Nominate.