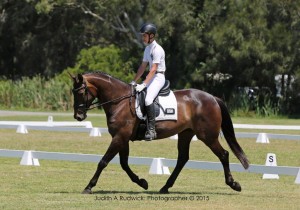 Kerrie Payne and Over Insured 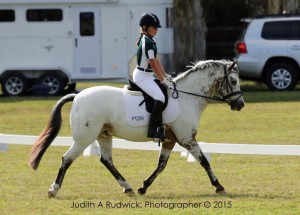 Shoalhaven Dressage Club held its final event for 2015 on Sunday the 6th of December. Whilst numbers were down, the competition was still strong as riders competed for points towards the yearly point score competition.

Junior riders certainly took the honours with top scores across the board. Highest percentage of the day was awarded to Charlotte Phillips and Rose Gum Goldrush scoring 77.286% in the Open Novice 2.2. Charlotte also won the Open 2.1 with 73.333%, thus securing her win as Novice Horse of the Year and overall Horse and Rider of the Year for 2015. This is a fantastic effort for a rider who has only been competing in dressage for a year. Another junior rider competing in the open classes, Angus Fripp, had 2 horses to ride. He had the second highest score of the day on TW Francheska in the Prelim 1.2 scoring 76.154%, and placed second in both of the Novice tests with great scores, 73.429% in the 2.2 and 68.519% in the 2.1 on Foxwood Remy. Angus finishes 2015 as Male Rider of the Year.

Another junior rider, Geri Wheeler won both of her junior novice tests on Glengannon Artorious with scores of 75% in the 2.2 and 73.3% in the 2.1. Geri cemented her place at the top of the junior rider of the year point score for 2015.

The 2015 Pony of the Year is Comet ridden by Emma Tinslay and he certainly showed that he deserved this title with big wins in the Pony Preliminary and Pony Novice tests, scoring 73.077% in the Prelim 1.2.

However the Juniors did not win everything on the day, Ros Quist, one of our over 25 years riders won both of the Prep tests with her new horse Resolute. This was their first competition together and they really look like a combination that suit each other doing 2 lovely tests.

My own Bokki also took advantage of the quiet day and uncrowded warm up areas to win both of his Advanced tests with scores of 70 and 71%. Very pleasing for his first attempt at this level.

Our next competition is the 28th of February 2016. Presentation Day is on the 10th of January 2016 once again at the beautiful indoor arena of Maxine Fripp. It will involve freestyles, details will be advertised soon but start preparing your music!!!